We arrived in Emei Shan after a 20 hour sleeper train, so we were pretty exhausted and ready to relax. Luckily the accommodation during our stay at Emei Shan was in a buddhist monastery. As we entered the monastery I could feel the serenity washing over me. 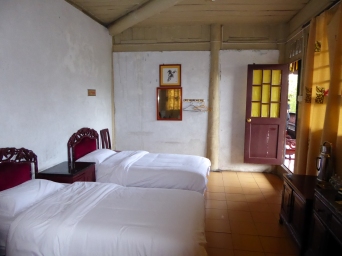 After freshening up in the communal showers, which was an experience in itself, we headed to our local guide’s place in town where we got a lovely home cooked meal. Our local guide Patrick was quite the entrepreneur, and always ready to please. He could provide a very cheap and efficient laundry service, dinner and breakfast cooked by his wife, local tours, transportation and discounts at the local hot springs. If you are ever in Emei Shan I would highly recommend his services. 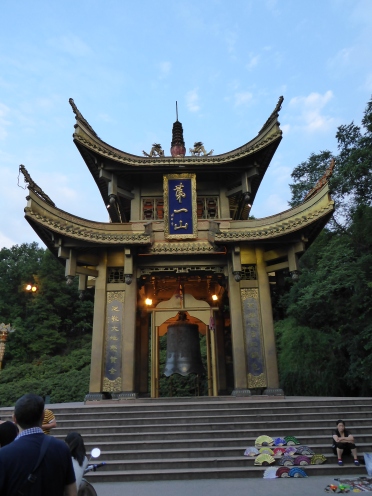 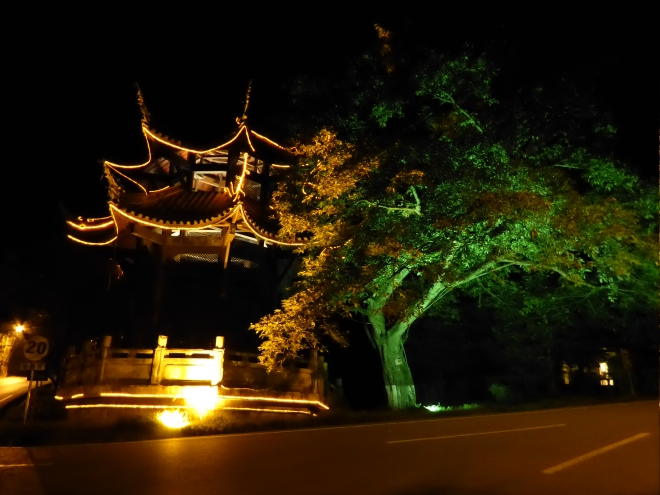 Early the next day we started our hike up Emei Mountain. The hike is actually a buddhist pilgrimage route, with a golden buddha pagoda at the summit, however our guide said that there was not much a view from the very top as it is always misty and it is a much longer hike. The hike recommended by G Adventures is to take the bus to a slightly higher car park, hike up to and along the middle path which takes you past two temples and ends in “the monkey zone” returning to a different car park.

We started on the walk and found to most of our surprise that it was more of a walk than a hike as there was a nicely stone paved road to follow for the duration including well proportioned stares, no problems with my knees this time. And if I had started to have trouble we were armed with bamboo walking poles. 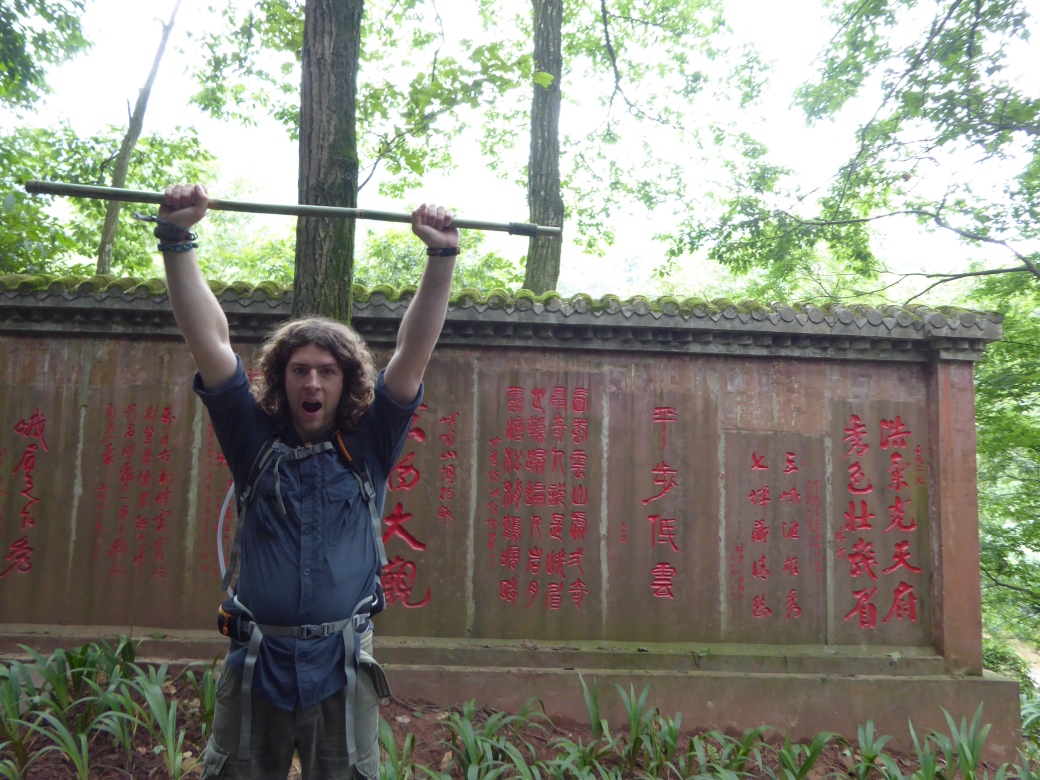 The surrounding landscape was beautiful from the start, we were immediately engulfed by forest with sporadic clusters of bamboo amongst it.

We hadn’t been walking for long when some of the people in our group ended up chatting to some Chinese tourists from Chengdu, their son wanted to practice his english and saw our group as a prime opportunity. He seemed very fond of wildlife and kept pointing out bugs to us. It was because of him we met Colin the Caterpillar which my husband saved from the path by getting him to crawl onto his bamboo and re-home him on a leaf, unfortunately his friend Connie had come to a less pleasant end before we came across them. 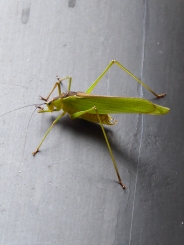 We made it to the first temple and there was an interesting square at the bottom of it with a strange totem pole in the middle. They had a display of the local crafts which specialise in silver. There was some stares to climb to get to the temple itself, I elected not to while my husband decided he wanted to run to the top. 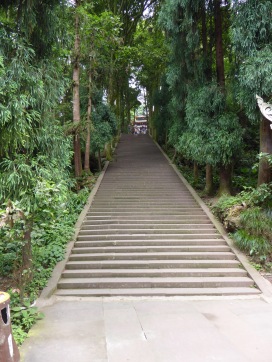 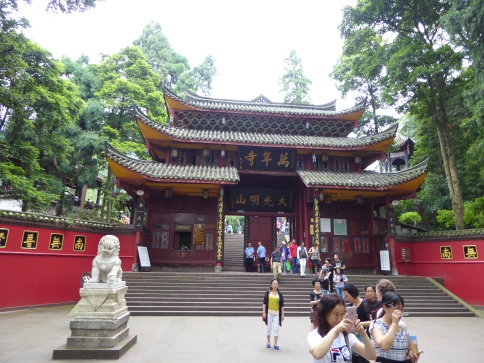 We soon continued on to the next temple which was more accessible larger and more beautiful.

While we were there some of our group decided to use the loos, which I heard were fairly unique in that down the long side of the room around 2 ft from the edge there was one long trough in the floor and at one end there was a cistern for the flush. There were partition walls but no doors. It sounds like a unique experience that I didn’t mind missing out on.

As we continued the walk the scenery became more dramatic with cliffs and water making an appearance. At intervals there were sculptures carved into the cliffs. I am not sure if they are originals or reconstructions but the effect was still pretty breath-taking. 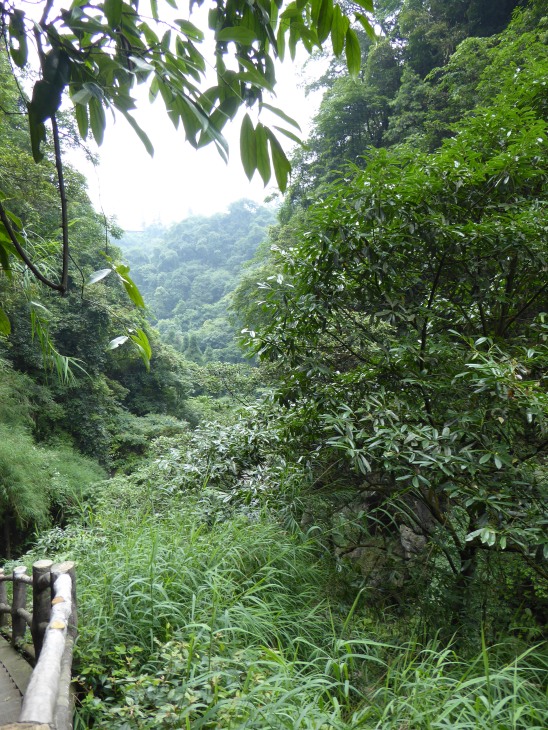 I thought I spotted a monkey, but we weren’t in the monkey zone yet so I realised it was only my husband having a snack. 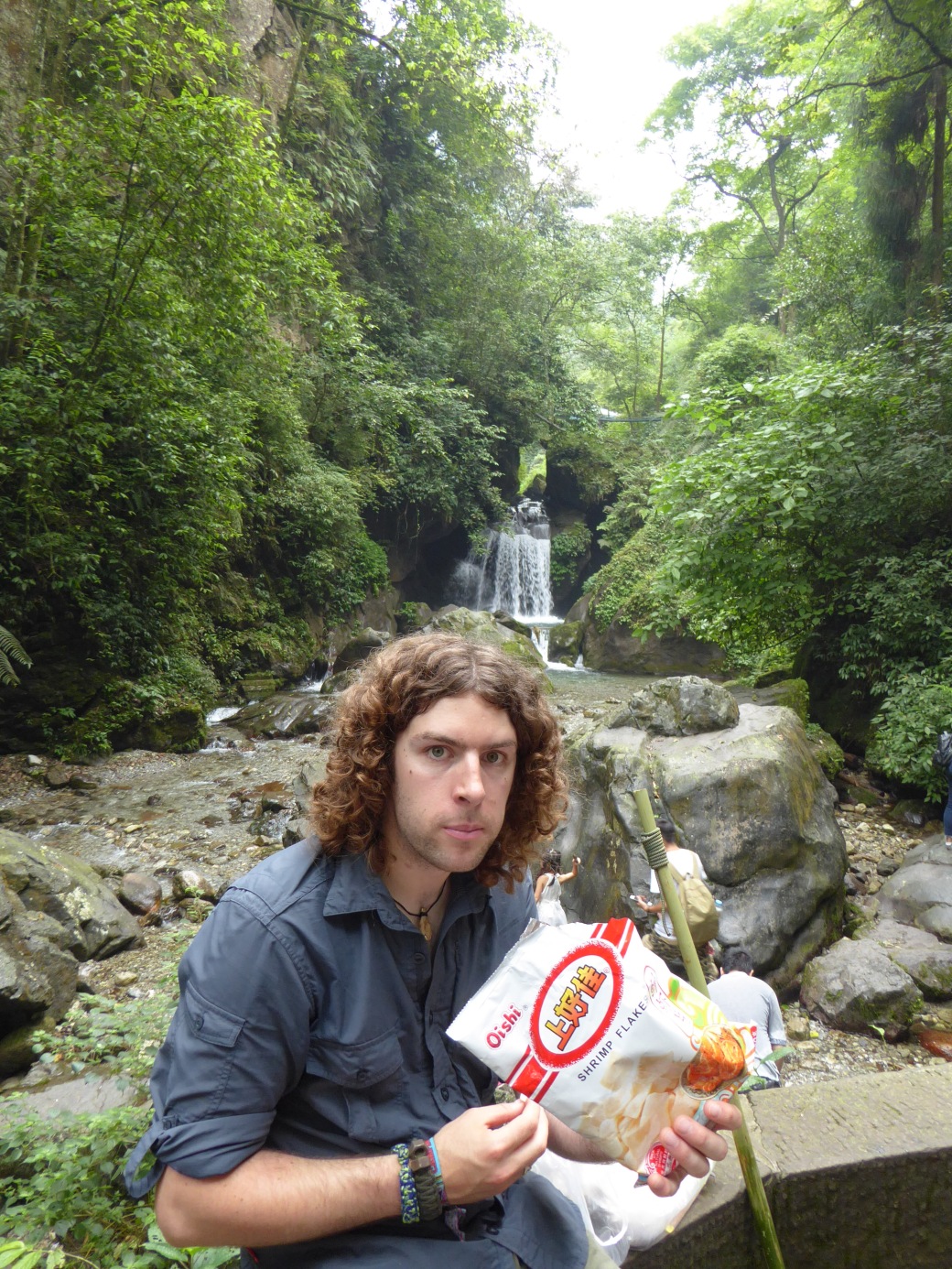 I noticed a few times that we seemed to be almost as much of an attraction to the Chinese tourists as anything else on the route, especially when I asked my husband to go and stand on the bridge so I could take a photo of him and this happened.

A similar thing happened when we were in the monkey zone surrounded by monkeys and some people asked my husband for a photo with him, we were beginning to think we had a business model in the making here. 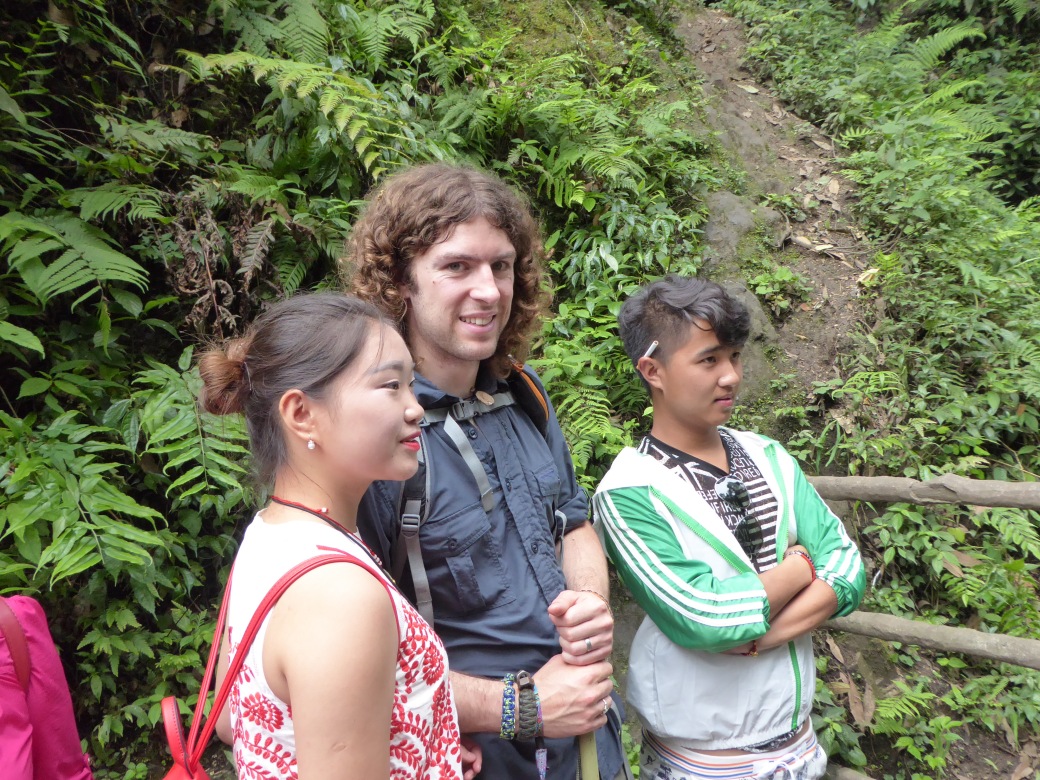 We made our way through a spectacular gorge and soon found ourselves entering the monkey zone. 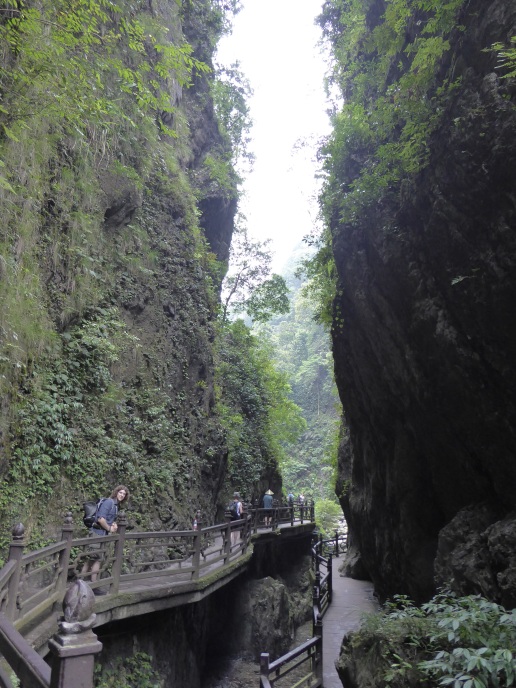 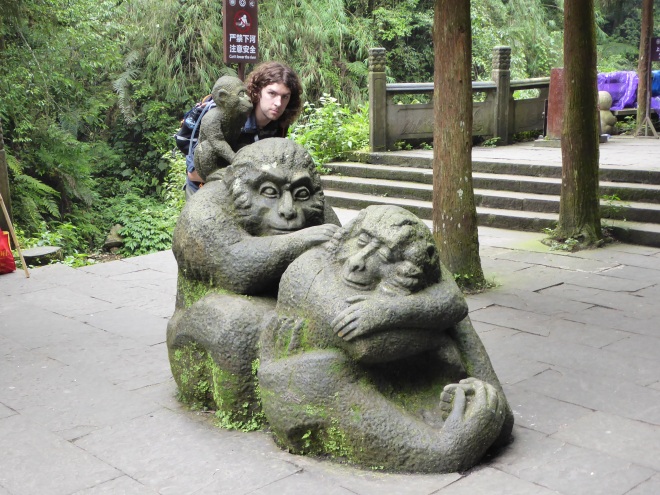 There were medical centres at the edge of the zone and multiple warning signs not to touch or tease the monkeys and against having anything on the outside of your bag that they could steal. This was among more amusing signage that we had seen earlier.

We walked some way before getting to the monkeys but when we got there it was slightly chaotic. There were a lot of people there all pushing past each other to get close to but not too close to the monkeys. I think we arrived just at two Chinese tour groups were arriving and leaving the area. There were also people offering photos of you with the monkeys for money, which was interesting since I am pretty sure they are wild animals.

Still I managed to get some good shots without being distressed or distressing the monkeys too much I hope. 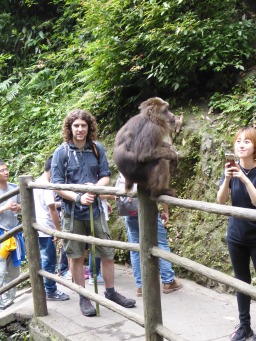 Unfortunately I can’t say that for everyone there, as we were making our way out of the area where the monkeys were a girl went up to a rather large male monkey and tapped him while he was looking the other way. The monkey turned round, singled her out, got down from his perch, walked over to her and bit her leg. To be honest this was just his way of saying don’t mess with me or I will mess with you but it was a nasty bite and had drawn blood. I hope the girl was ok and the monkey hadn’t had rabies or anything like that. We decided not to stick around to find out as she was with her family and we wouldn’t have been able to communicate anyway.

As we made our way back to the car park we continued past more wonderful scenery and rather randomly a crab. I wondered if it had escaped from someone’s food stall but it could have been a fresh water crab I suppose.

We were all very hot and tired after our walk so we decided to have a dip in the local hot springs, which were lovely though we seemed to miss a few of the pools. There was also much hilarity involving an inflatable crocodile, giant flamingo and a “Wave Attack” but that is not my story to tell. If you are interested then check out #lexit, she was in our group and has added her blog on China so you can see the whole thing from a different perspective if you are interested.

This post is in no way sponsored, links are included to help people find the relevant information if they are interested. I have only included links that we have used, I am sure there are other services that would work in their place.