In China longevity has a very important place in their culture and on our last full day in Emei Shan we actually visited near-by Leshan and saw three different sides to longevity.

The day started with a trip to the Leshan Buddha, our local guide, Patrick, was good enough to arrange transport for the group, half of us went in his car and the other half in a colleagues car. I was in the collegues car which was an interesting experience given there was a video screen in that car and he was playing some electronic music on it very loudly with the same videos on repeat, mostly consisting of skimpy clad women gyrating. This would have been fine for 20 minutes or so but after an hour it became a bit much.

The Leshan Buddha is, I believe, the tallest stone statue of a buddha in the world. It is carved into a cliff face and has hollow sections within it, some of which used to contain important buddhist scriptures and some which are in place for drainage.

We had opted to view the buddha from a boat rather than climbing next to it on the advice of our guide as you get a much better view from the boat and the crowd is very slow-moving on the steep steps passed the buddha.

The buddha was much closer to the port than most of us expected and there was definitely a moment of surprise and awe on the ship as suddenly the cliff gave way to the statue. 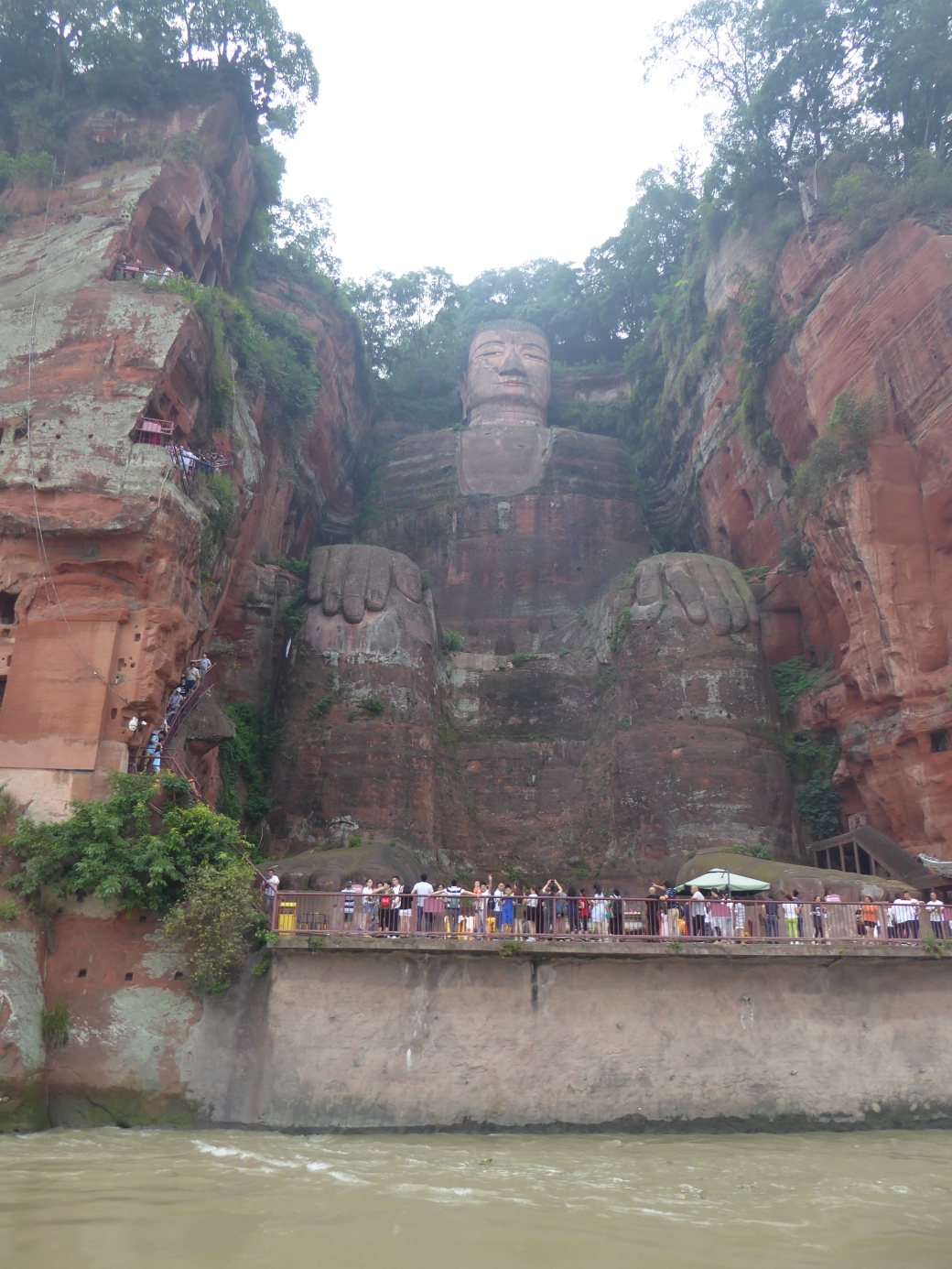 The buddha was originally carved to give peace to the waters of Leshan as it is an intersection of rivers and very fast-moving. It was built-in the 8th century over many years and has been maintained by monks in the area ever since making this statue its own symbol of longevity. 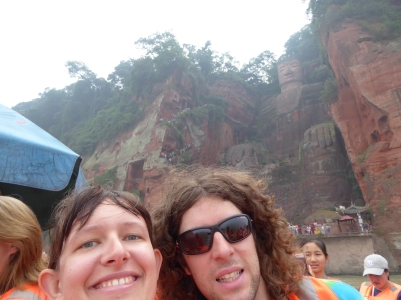 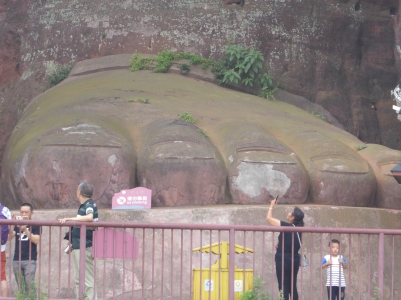 Given how close we were to port the morning activity was over before any of us realised it would be. Luckily we still had an action packed day ahead of us. Patrick took us on a tour of Leshan. We started with the local market which was the definition of organised chaos.

There were people everywhere buying and selling wares, Patrick led us through and gave us the chance to try some things. We tried a 10,000 year old egg (I ate from the yolk side and it was actually ok), some fried tofu and some sesame sweets. We saw some interesting sights including massive jars full of 40% or more wine; some noodles hanging up to dry and congealed rice in corn leaves. 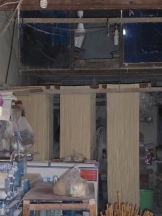 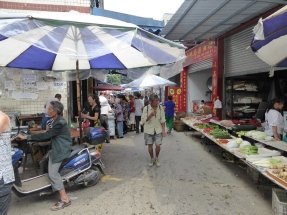 There was also the meat market. Which possibly wasn’t the best place to take the vegetarian in our group, she very understandably got quite upset. In China the way that they can tell how fresh the meat is, is to see it killed and prepared in front of them. This does make sense seeing as they don’t have the refrigeration standards that are available in the west, but it can be upsetting for those not used to seeing it, particularly when they have made the decision not to eat meat.

Personally I was not upset at seeing live animals and meet in the market (although I might have been if I had seen them killed in front of me) it was more the conditions the animals were kept in while in the market. The ducks, for example, had their beaks tied and their legs tied so that they were stuck on the ground. It is all part of the culture, so it was part of the experience, luckily I wasn’t at the market with my husband later when he saw dogs and cats in a similar position.

After the market we started to be introduced to some locals who all had a few things in common: they all smoked, they all drank green tea and they were all in their 80s and 90s. The first man lived in his shop and made cigars out of tobacco leaves simply dried and rolled.

We were welcomed into the home of one of the tea plantation owners who plied us with tea as he sat smoking his pipe. The labourers who worked for him were busy playing mahjong in the front room. The house looked ready to collapse but we were told that like its owner it was still strong. The family had originally owned two houses however during the communist years one had to be given away. 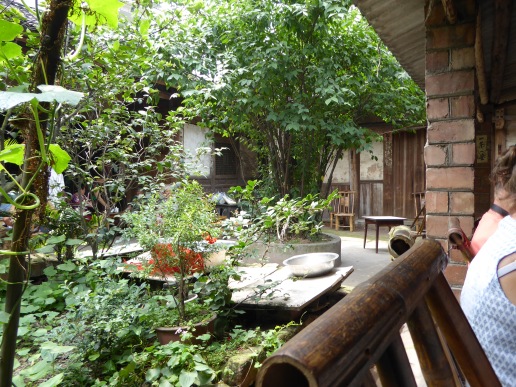 Next we met an extraordinary man who was 99 and still ran a shop where you could buy paper versions of things to burn at funerals as is the chinese custom. These ranged from the classic paper money, to houses and even suits made of paper. The idea is that if in life someone had always wanted a house, for example, but had never managed to buy one, you burn a paper version and they will have one in the afterlife. The man did not look 99 and he said this was due to drinking green tea. Not only that, he still used an abacus to work out all his sums and was pretty quick with it too.

As we visited another home we asked if the people didn’t mind a bunch of tourists traipsing around their house, particularly when we were encouraged to go into their bedroom, but it was explained that the Chinese think of privacy as a shameful thing and things should not be kept private the way they are in the west. This is also why it is perfectly acceptable to ask someones age or even weight. 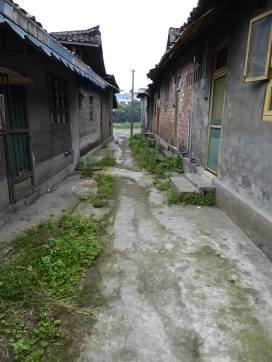 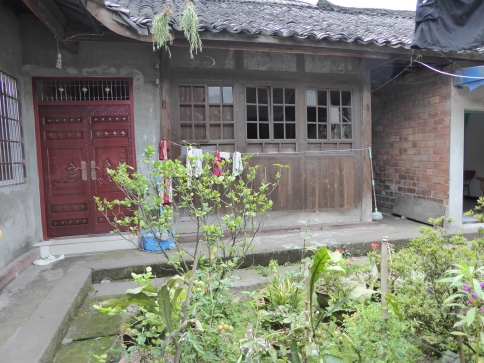 As we left that house we saw a lady who was in her late nineties making her way home from work. She made and sold brushes made of twigs, it was a sad story as her son and husband had died leaving herself, her daughter-in-law and grand-daughter. As there are no pensions as such in China it is usually up to the children to look after their aged parents, but when they can’t the elderly have to keep working for the rest of their lives.

On a much lighter note, we made our way through a bamboo market where they were selling some rather amusing chairs that were presumably to help westerners deal with squat toilets.

After the tour of Leshan we went to see the making of the magic potion that gave all these towns folk their longevity, green tea. As we approached the tea plantation we were taken aback with the surroundings. 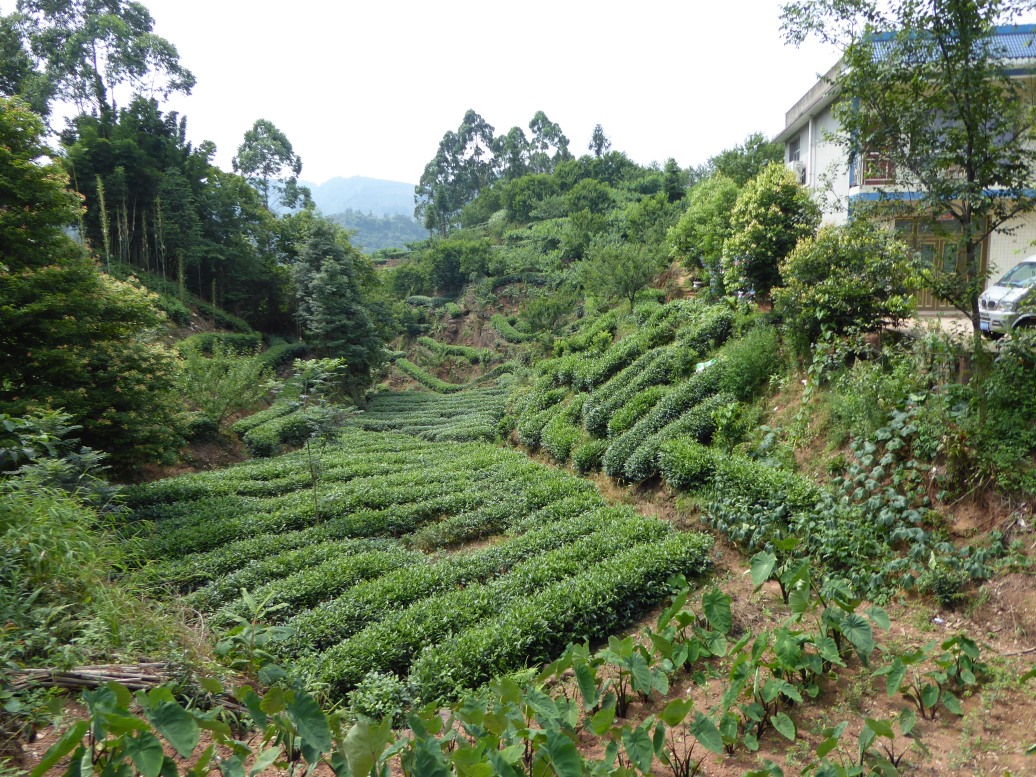 When we arrived we were given a taste of tea and a lesson on how to recognise top quality green tea. Apparently if the leaves sit vertically in the water it is good quality. We were also given a brief history lesson on the production of tea and the different types produced in China before being given hats to wear and being sent out to do some picking. 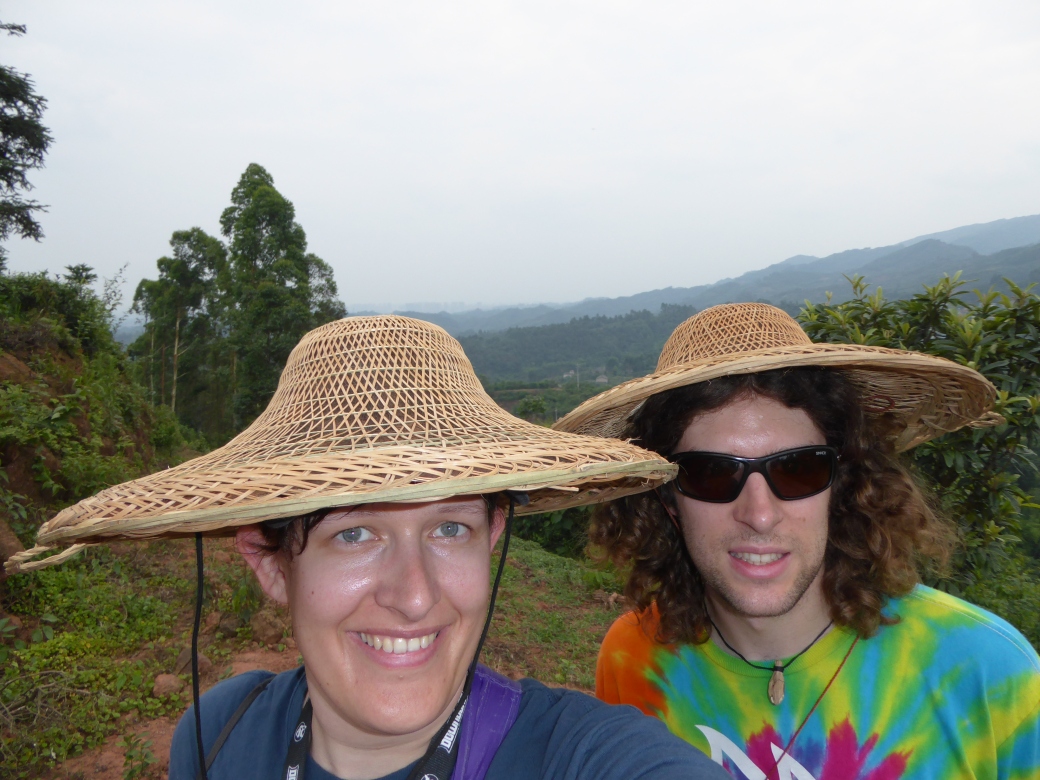 We were tought the basics of which part of the tea-plant to pick and what time of year they are picked at. The new shoots produce the best green tea and these are picked in the spring, as we were in summer we picked a new shoot with one full leaf. After our attempts we were encouraged to go back to see how it is processed. 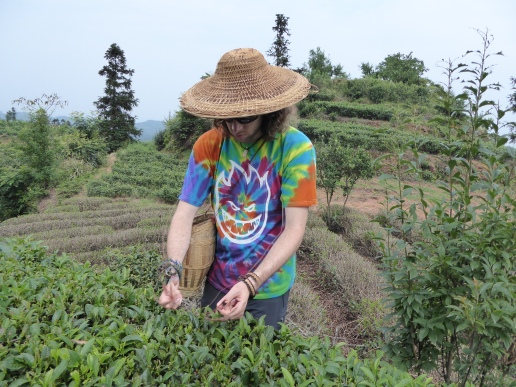 We were shown the traditional method of processing green tea. First they light a fire under what was essentially a stove, this got up to a very high temperature which was interesting with no chimney. 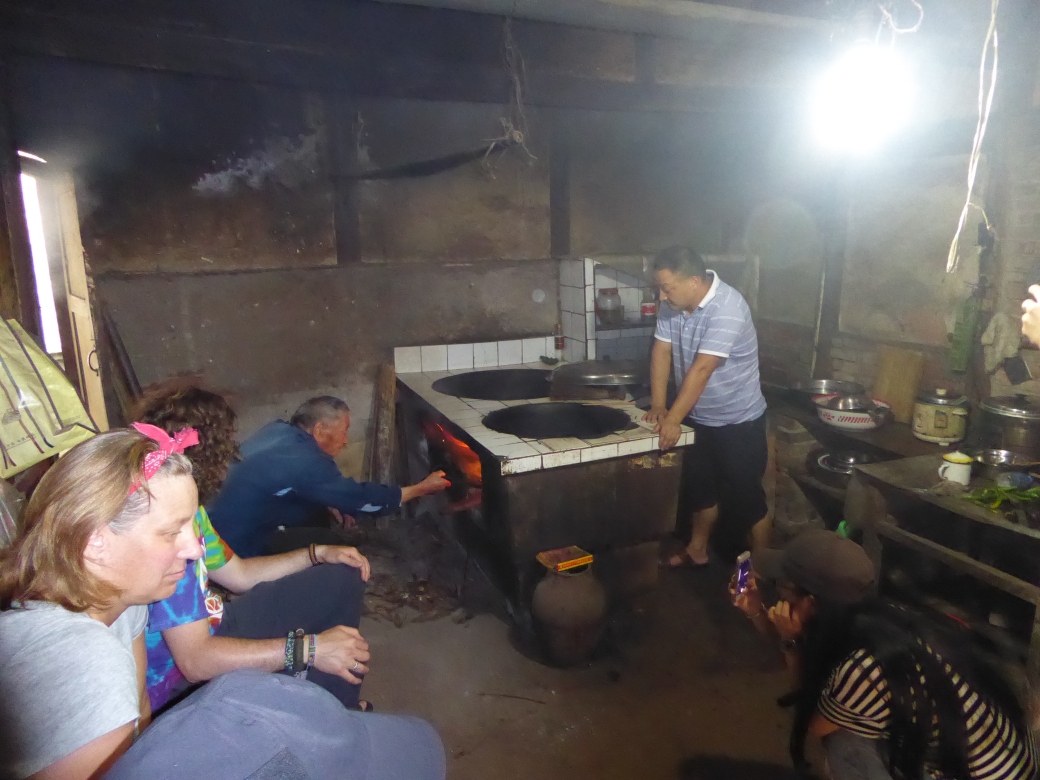 Next the leaves were introduced to what looked like a giant wok built into the stove and stirred by hand (I can’t understand how they don’t burn themselves) and the leaves lifted every so often to give them air.

Then the leaved are put onto a large wicker plate to be shaped, this must be done quickly by rolling and squashing the leaves. Finally the leaves are put back on the stove at 100 degrees and dried for 4 hours with occasional stirring.

We didn’t see the end product from the leaves we picked, but we were given a batch from the previous travelers to visit.

My impressions of the Chinese way to achieve longevity are to either be made of stone or drink vast amounts of green tea. There is of course the longevity mushroom, but that is for a different blog I think.