So I think I have mentioned before how far behind I am with my blogs. We actually got home before Christmas, but I plan to fill in the gaps. I actually plan to do blogs on either end of the gap until it is filled in. So here is what we spent our last day doing before heading to the airport for the final time.

We got our flight home from Tokyo, and we didn’t want to have too hectic a day, so instead we decided we wanted to sit and relax while watching everyone else rushing around. We decided the best place to do this would be at Shibuya Crossing, so that is where we headed.

We couldn’t go to Shibuya Crossing without going to see the Hachiko statue. I am not a dog person, but the story of Hachiko is such a lovely one and also very similar to a story I grew up with of another famous dog who was from Edinburgh (which is local to me) called Greyfriars Bobby. Essentially in both stories both dogs loose their owners and they are so loyal that they return to a special spot at the same time each day. In Hachiko’s case this was the train station, where he used to meet his master from the train, and in Greyfriers Bobby’s case it was the grave of his master in Greyfriers Church when the one o’clock gun went off.

The Hachiko one may sound familiar as there is an Americanised film of his story featuring Richard Gere, but it is based on a true story and the statue marks the point where Hachiko used to wait.

Being that I am a cat person I was pleasantly surprised to find a cat and her kitten sheltering under the statue. Although I thought this was incredibly cute, I do feel it might have been set up as some of my friends were here a year ago and sent me a picture with the same cat, also my husband spotted a person which he thought the cats may have belonged to. Either that or these cats just live here on a permanent basis. 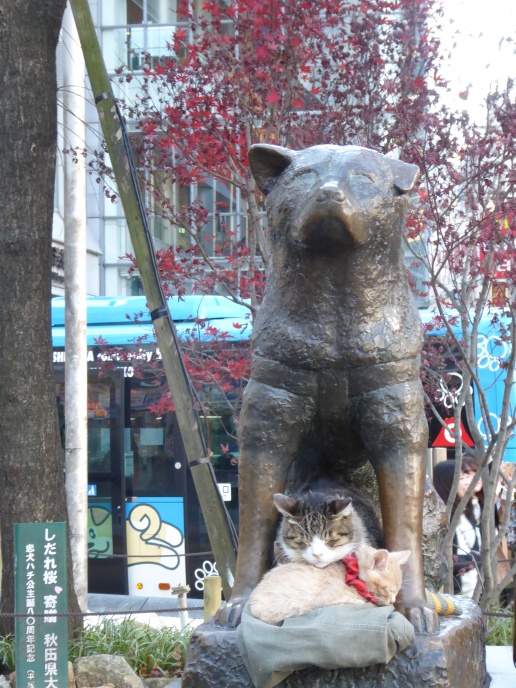 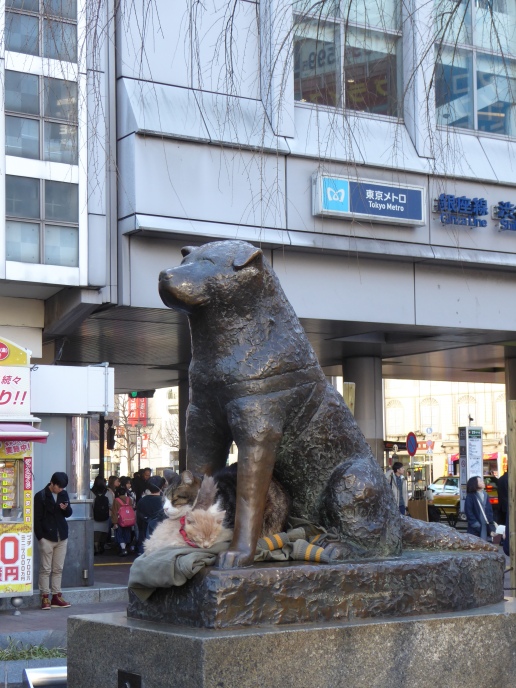 We then crossed the famous Shibuya crossing and made our way to Starbucks diagonally opposite. I know Starbucks isn’t exactly Japanese, but it is situated right on the corner of the crossing one floor up with fantastic windows to people watch from. To be honest it can be really quite interesting seeing the differences between these familiar franchises than what you would expect at home, for example I had a delicious yuzu tea.

The Starbucks was very busy as you may expect for a rather cold morning and there weren’t any seats near the windows when I first went up to find some while my husband was buying the drinks. However, after a little bit of creative chair rearranging I managed to get one chair near the window. Thankfully when my husband appeared with the drinks another chair became available and he pulled it over to join me.

And that was it really, we sat drinking our tea and watching the crowds outside. I figured I must have a time lapse function on my camera as it seemed to have most other things and I spent some time figuring out how to get it to work the way I wanted to. I don’t have a tripod so we used a few things piled on top of one another to get it to the height I wanted it. At first the time lapse had too long between shots and the camera turned itself off and on to conserve power; the problem with that was that the weight of the lens was causing the camera to rock each time, but eventually I found the setting to change the length between shots and the camera remained precariously balanced.

I think it came out OK for a first attempt, although I was surprised how often the camera captured it looking almost empty as from the window it seemed a constant hive of activity. We even saw people dressed up like characters from Mario Kart go past in go-karts several time from different directions. I wonder if you can spot them in the photos.

Eventually we headed back to our hostel to collect our bags and head to the airport. And there you have it that is where this adventure came to an end. As I mentioned at the beginning of this post I intend to fill in the gaps, if there is any part of our journey you are particularly curious about leave a comment. I am also quite sure this will not be our last adventure as my feet are getting itchy again already, but it may be some time before our budget allows any more.

One thought on “Our Last Day Traveling”