While in Tokyo we had a few experiences with robots that I would like to share with you, most of these are not necessarily robots in the traditional sense, but more for entertainment. We have been to Tokyo before and at that point we did most of the touristy things, including seeing Asimo, so this time we just decided to have some fun.

The first robot we saw was also the first thing we did in Tokyo thanks to my husband, as he was obsessed with going to see this Robot for months before we even got here. I am talking about Unicorn Gundam. The first time we were in Tokyo we saw the original Gundam, but it has since been replaced by Unicorn Gundam.

Unless you are very into Japanese culture, you are probably fairly lost right now. Mobile Suit Gundam is an anime series that started in the eighties. It is basically the story of a boy genius who uses the giant robot suit, designed by his father, to fight in and end the war raging in the galaxy. You may be more familiar with Power Rangers, which was the live action show inspired by Gundam but was more focused on selling toys. As with a lot of these types of series, it went through a series of generations of bigger, more powerful robots, including Unicorn Gundam.

So at Gundam Front there is a life-sized replica, previously of the original RX-78-2 Gundam and now Unicorn Gundam. It is quite impressive to see a giant robot in front of a shopping mall. 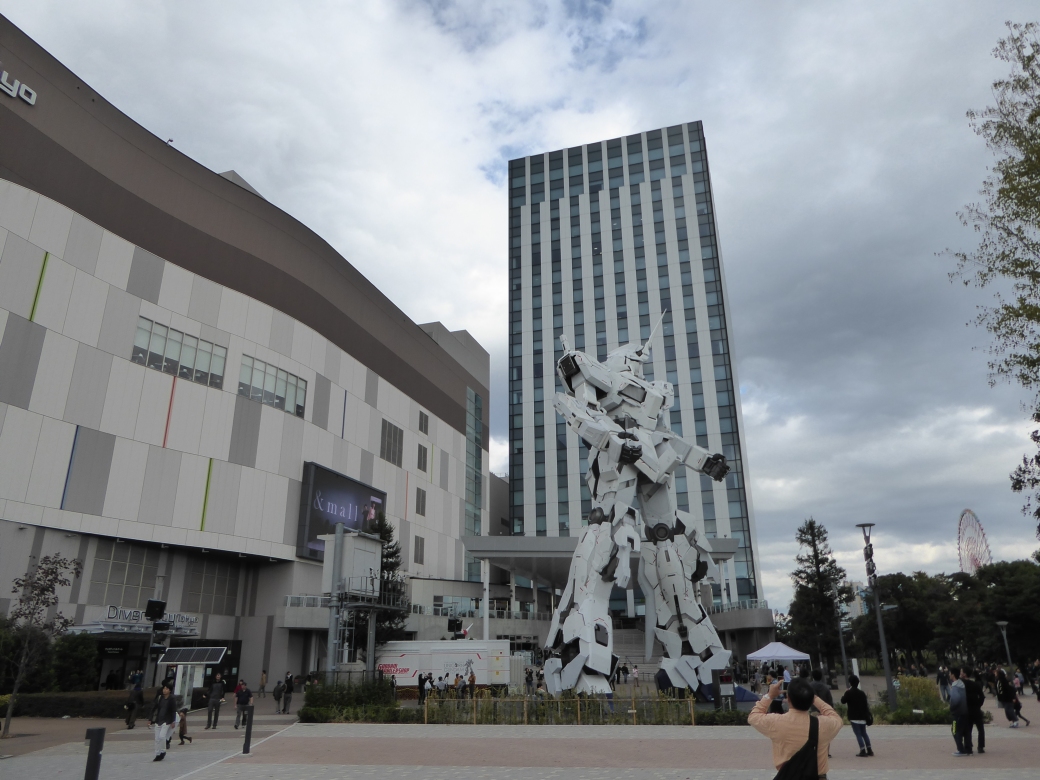 At set times during the day the Gundam will activate, with the previous one this involved moving its head around (and I think maybe its hands as well) as a lot of dry ice and flashing lights. Unicorn Gundam was, I have to admit, a bit less impressive; it transforms between normal mode and destroy mode, so basically its horn splits (making it no longer a unicorn in my book) and a shield comes down to show its face and there is a bit of flashing. 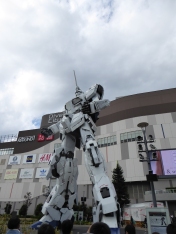 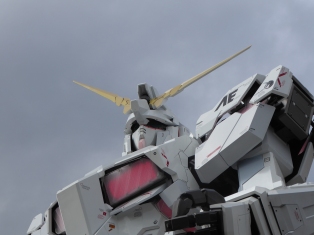 There was also a show in the evening, but this consisted of the same thing happening with the anime projected behind it. I was a bit disappointed to be honest, but my husband seemed to enjoy it so that is the main thing.

After seeing the robot itself and having a refreshment from Gundam Cafe, we went inside to Gundam base. Last time we were here it was a small room with maybe a maximum of fifty models in it and some for sale; this time it was much more impressive. For a start the place was massive with seven or eight rooms connected by a central cinema type room which was showing the anime and there were hundreds of models.

There was even a display of models that had won awards, my favourite was a Persius Gundam fighting a Medusa Gundam.

We did a lot of wandering around Tokyo and while I intend to dedicate a post to just that later on, one thing we came across during our wanderings was relevent to this post. We were just wandering through a mall relatively close to Gundam front where we saw a lady behind an information desk, except it wasn’t a lady it was actually a robot!

As you can see, she was very realistic looking, I had a double take before I realised that she wasn’t real. She seemed to be answering questions as you might expect in behind an information counter, but I feel like most of the people didn’t need the answers and were just enjoying interacting with her, especially since you interacted through an air screen, you know like the ones in iron man or something like that.

Our final, but in my opinion most fun robot experience was at the Robot Restaurant in Shinjuku. It was hard to miss the glaring facade of the robot restaurant as we approached, even the box office where we picked up our tickets was obnoxiously loudly decorated. It was covered in pictures of the celebrities who had preceded us, although the only one I personally recognised was Tim Burton.

After collecting our tickets we made our way across the road to enter the restaurant, but first there was a rather amusing photo opportunity to be had. We were sent up to the third floor waiting area where we were greeted by an onslaught of shininess and video screens. There was a bar and some people dressed as robots performing lounge music for us to wait to.

Eventually we got the call to make our way downstairs as the show was about to start, that is right, despite the name this is primarily a show with the option of food rather than a restaurant. The stairway itself also had some impressive decorations, each floor had its own separate theme. 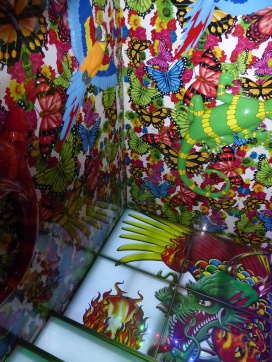 Once we made it to the bottom floor we found our seats and were delighted to find that we were in the front row. We took our seats and were just trying to figure out how to let someone know that we had booked for the meal when someone appeared from nowhere to help us (as seems to happen often in Japan) and took our food tickets saying our meals would be brought out shortly. Sure enough our meals soon appeared in front of us, we hadn’t ordered a bento box, but what came out was in a similar style, but with one important difference, there was a string that we had to pull and then wait for 10 minutes till the steam stopped, so essentially we were cooking our own food. We had short ribs and rice and it was delicious.

While we were waiting for our food to cook people arrived on the stage with signs warning us that if we went to the loo now we wouldn’t be allowed to re-enter for 15 minutes. Shortly after that people came around and closed off the walkways into the seats and we had a welcome talk warning us that some of the robots may come close enough to us that we would have to lean back. They gave us a practice run with a pig in a plane, so I guess this set the stage for the show given that it started with a flying pig.

Then it was time for the show to start. There was an amazing parade of tenko drums on cars, women and people in masks dancing and some guitars on a fish float. It was everything we had expected: crazy, loud and general sensory overload. 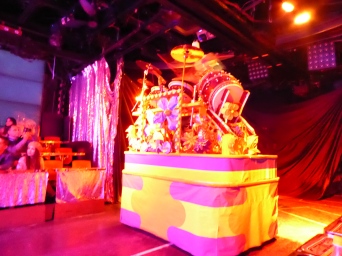 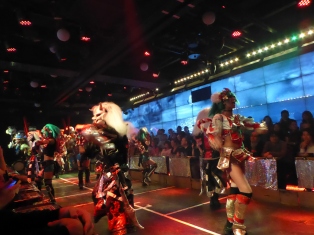 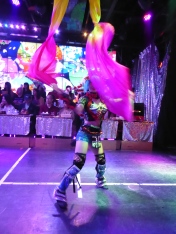 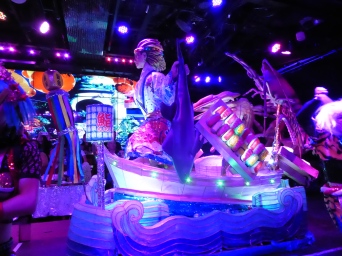 This was followed by a bathroom break where I nearly missed my chance to come back to my seat as the queue for the lady’s toilet was so long. When I reappeared chains had been put up to separate the robots from the seats and I had to ask to be let into my seat. We had an introductory video on the walls about some planet where people (although they seemed to be all women) lived in harmony with nature until one day the evil robots invaded and tried to destroy all nature on the planet, cause… you know… they were evil robots. This then went into an awesome show taking the typical Japanese story line of: I am so powerful no-one can defeat me, I will defeat you, oh wait you are too powerful I cannot defeat you, I am more powerful I will defeat you, oh no I am defeated, but wait there is someone more powerful etc. So not much of a story line, but hey we didn’t come for the story line we came for amazing visuals, robots and skimpily clad girls (ok maybe not the last one but they were pretty good dancers). There was even a robotic dragon! 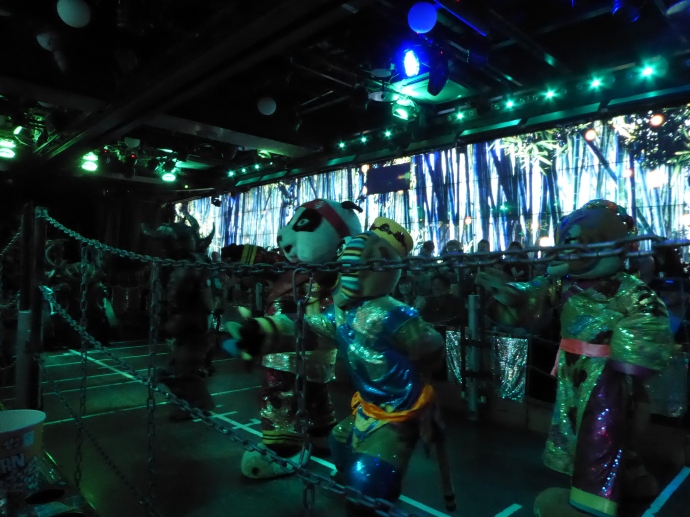 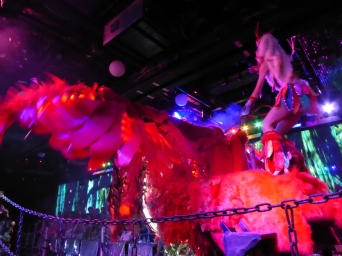 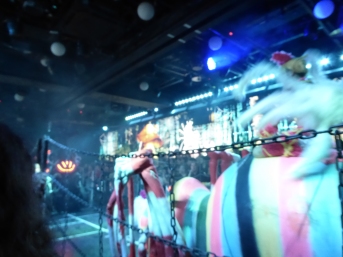 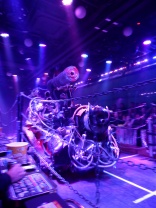 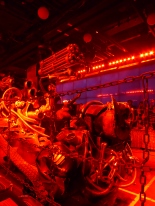 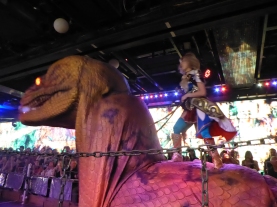 After another break we had a Michael Jackson medley with tron style robot dancers and human dancers. The robots were called Kingrobota for some unexplained reason.

The final section of the show was my favourite. It was basically just a big carnival each line that came past having bigger and crazier robots, costumes and dances. It was also really awesome because we were in the front row and the dancers could see when I was taking pictures loads of them stopped to pose for me. 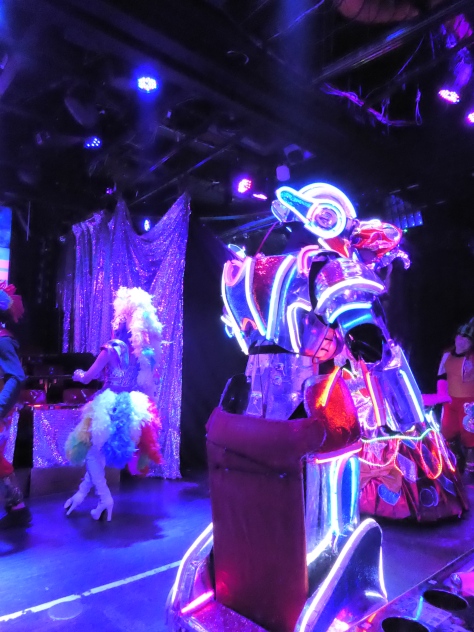 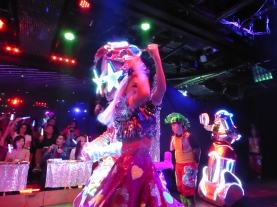 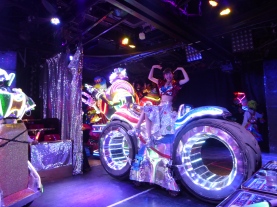 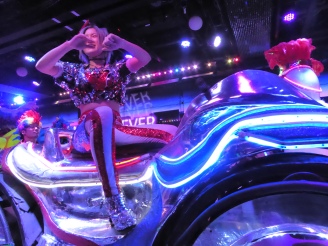 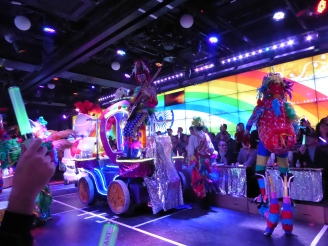 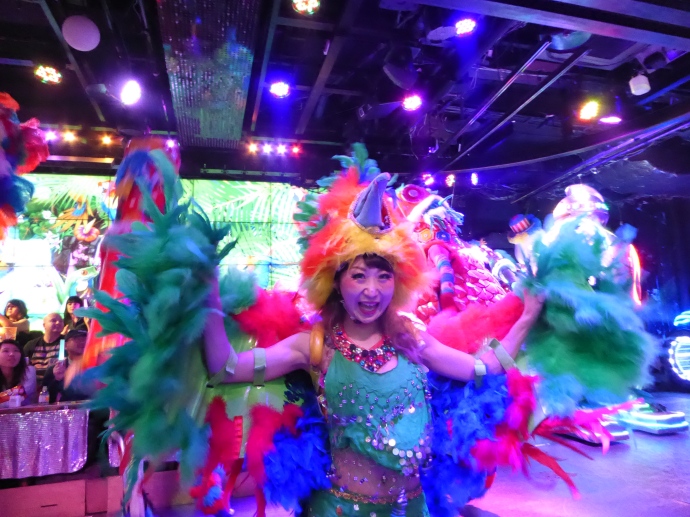 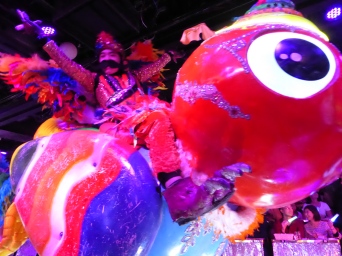 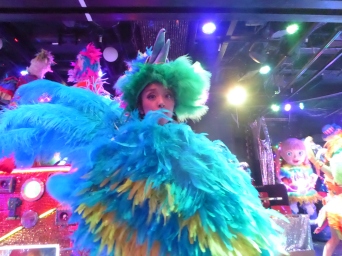 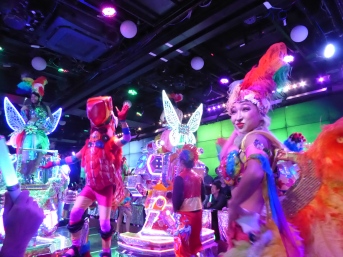 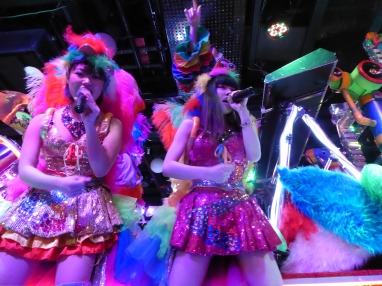 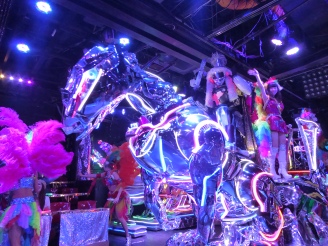 We left the robot cafe feeling very entertained, which was after all the point. We thoroughly enjoyed our time in Tokyo and that was in part thanks to robots, but much more thanks to the amazingly fun, polite and kind people behind the robots.

This post is in no way sponsored, links are included to help people find the relevant information if they are interested. I have only included links that we have used, I am sure there are other services that would work in their place.