I have already written about some of the less pleasant, but probably more important sites we vitised while in Phnom Penh, however we did do a few other things while they were there which I would still like to share with you.

First off, I want to talk about the hostel we stayed in, Eighty8 Phnom Penh, as it really was a nice one and our first (and possibly best) experience of staying in pod type accommodation. I know this originated in Japan, but honestly I preferred these pods. We were essentially sleeping in shipping containers, which sounds dreadful but it was really not. The containers were fitted out with a large, comfortable mattress, lights, several fans, and plug sockets for chargers. There were lockers under the containers which was more than large enough to fit our bags and I like to sleep in pitch black so it was great for that. The interior also felt really spacious as the bed was larger than a standard single. 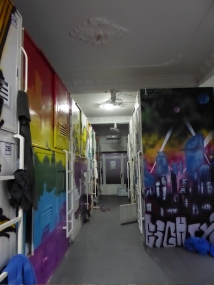 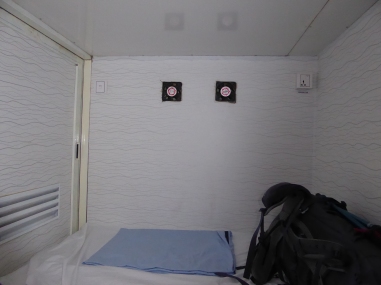 The hostel was also great with helping us out with tuk-tuks making sure we weren’t ripped off. There was even one point where the one tuk-tuk driver got a bit annoyed as the hostel had promised us the local price, but being that we kept organising through the hostel, we actually ended up with the same driver a lot of the time, which was nice as it meant we got to know him a bit better, so if you are at this hostel see if you can get Tom as your tuk-tuk driver, he even gave us a recommendation of massage spa which was really very good.

The main thing we did in Phnom Phen, with the exception of visiting the Killing Fields and Genocide museum, was to visit the Royal Palace, which was home to the Kings of Cambodia before the time of the Khmer Rouge and has since become the home of the current royal family.

We had a guide for our tour, all of the guides were wearing purple, it was explained that this was to do with the days of the week as all of the palace staff according to tradition wore different colours on each day. There was even some mannequins demonstrating this concept, although our guide was much more casually dressed.

We toured around the outsides of most of the buildings, on a rather hot day, seeing the Throne Hall, Khemarin Palace and the Moonlight Pavilion. 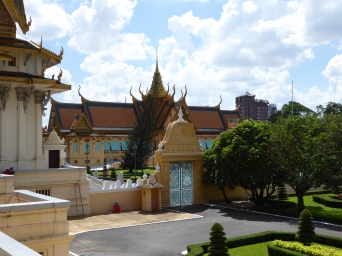 The most memorable to me being the Moonlight Pavilion, pictured in my feature image at the top. The king used to house great banquets in the Moonlight Pavilion, as the open air nature of the pillars allow the inside to be moonlight and relatively cool. Dancers would perform here for the king, all of which were female, even as our guide said those portraying hideous monsters, and some of which were taken as courtesans to the king.

Our guide also told us the ironic story that Pol Pot’s sister was actually a dancer here, and after the king took a shine to her, her money was actually what financed Pol Pot to go to University in France where he got his ideas for communism.

We also got to go into the Silver Pagoda, however we were not allowed to take photographs inside. The Silver Pagoda is not actually silver on the outside, the name comes from the floor where there are more than five thousand silver floor tiles, mostly covered up by carpet to protect it. Our guide said something about the silver being melted down old currency, but I can’t remember exactly what he said and I haven’t been able to find any reference to this online. Besides the floor itself the Silver Pagoda houses many national treasures including a large diamond covered golden Buddha and a green Buddha known as the emerald Buddha (but most likely made of Baccarat Crystal) which the Pagoda used to be named after before the installation of the floor.

We saw a few display cases housing various costumes, some of which you have already seen. There was one however which came with a tale, the wedding attire traditionally worn by the royal family, and the story comes from the origin of the Khmer people.

The sea serpents proceeded to take all the water away from the land of Cambodia, however they still wanted to be close to their daughter so they left one strip for themselves which went across the land (the Mekong River) and this satisfied the prince. I believe that the tale goes onto say that all Khmer are descended from that couple and it is the reason why the wedding clothes pictured above looks like and Indian prince and the female clothes have the representation of a tail.

This myth may again not be the exact myth as I am going off what our guide told us, after trying to research it further I could only come up with vague references to the sea serpents.

The final part of the tour took us to the back of the palace where the Royal Stupas are situated together with a garden shrine dedicated to the Buddha. 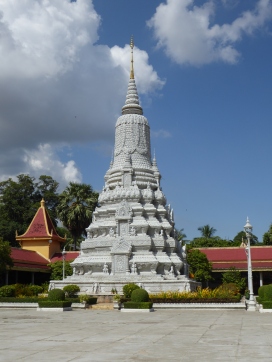 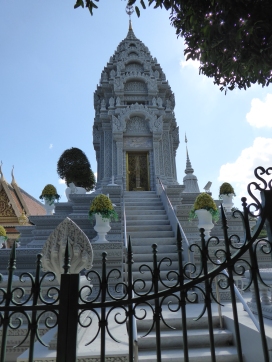 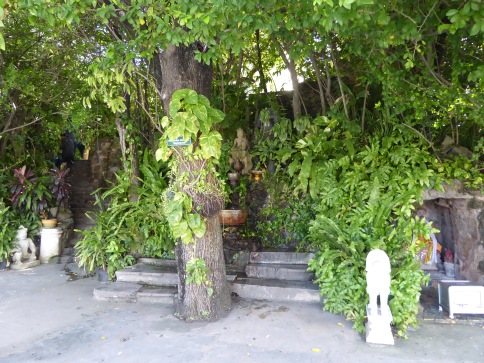 This is where our guide left us, we had a little bit more of a wander around, finding a couple of cats before making our way back to meet our tuk-tuk driver who took us on to the massage place I mentioned earlier. 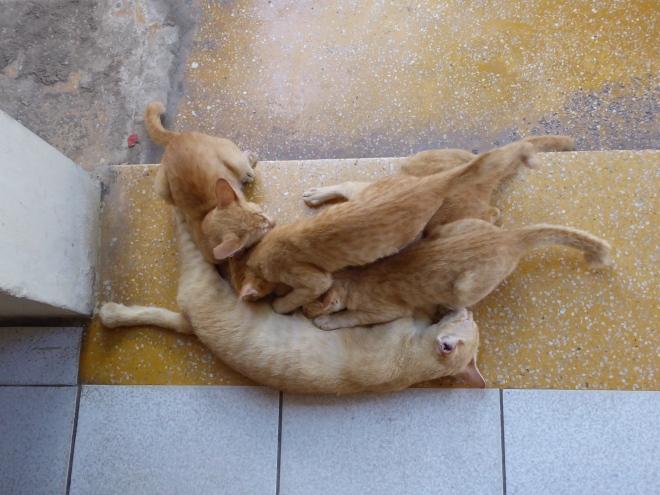 Although our main reason for visiting Phnom Penh was to learn about the important yet tragic history, and then carry on to Vietnam, there is definitely more to see and do in Cambodia’s capital than that.