We had been to Hokkaido, the north island of Japan before. We went snowboarding in Niseko in 2013 and we had even flown to the capital of the province Sapporo at that time, but we didn’t actually spend any time in Sapporo. Clearly as we had been snowboarding we knew there was a lot of snow, but we had come in February previously at peak season and this time we were arriving at the very beginning of December. To be honest the amount of snow that greeted us when our train exited the tunnel and we saw our first glimpse of the north island was much more than expected. Especially as everywhere else we had visited had been cold, but with no snow. 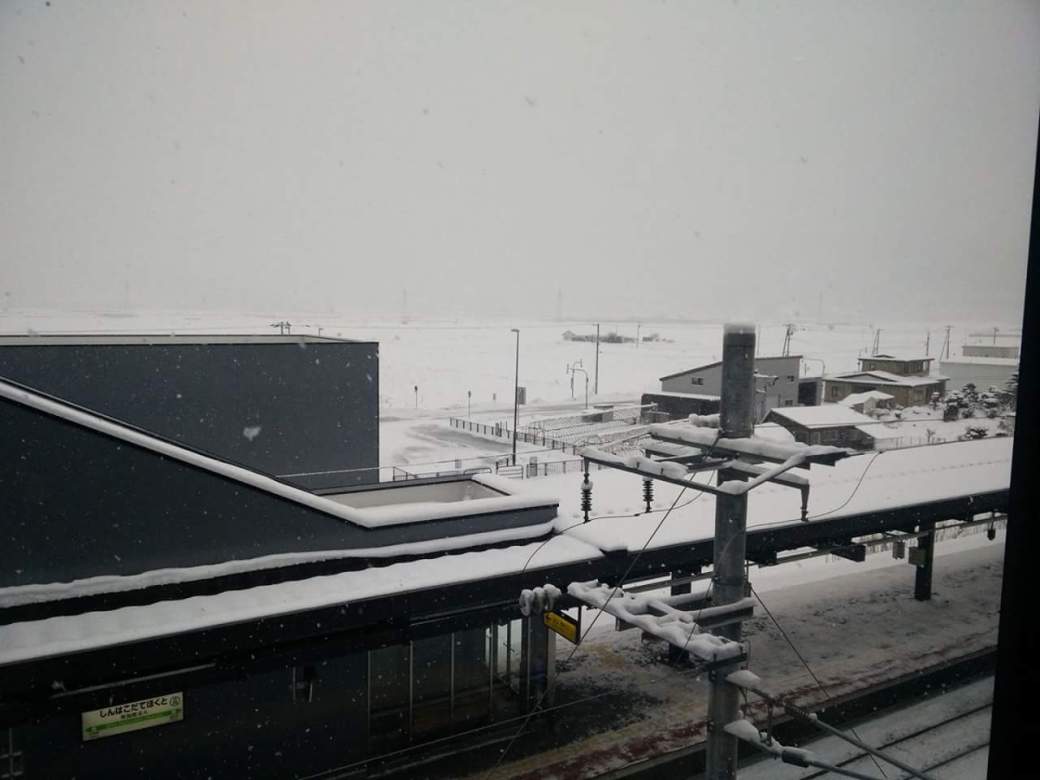 We arrived in Sapporo station and while we were in search for the ticket office to book our onward travel for the next day (which I will be writing about in a future blog) we came across this statue. 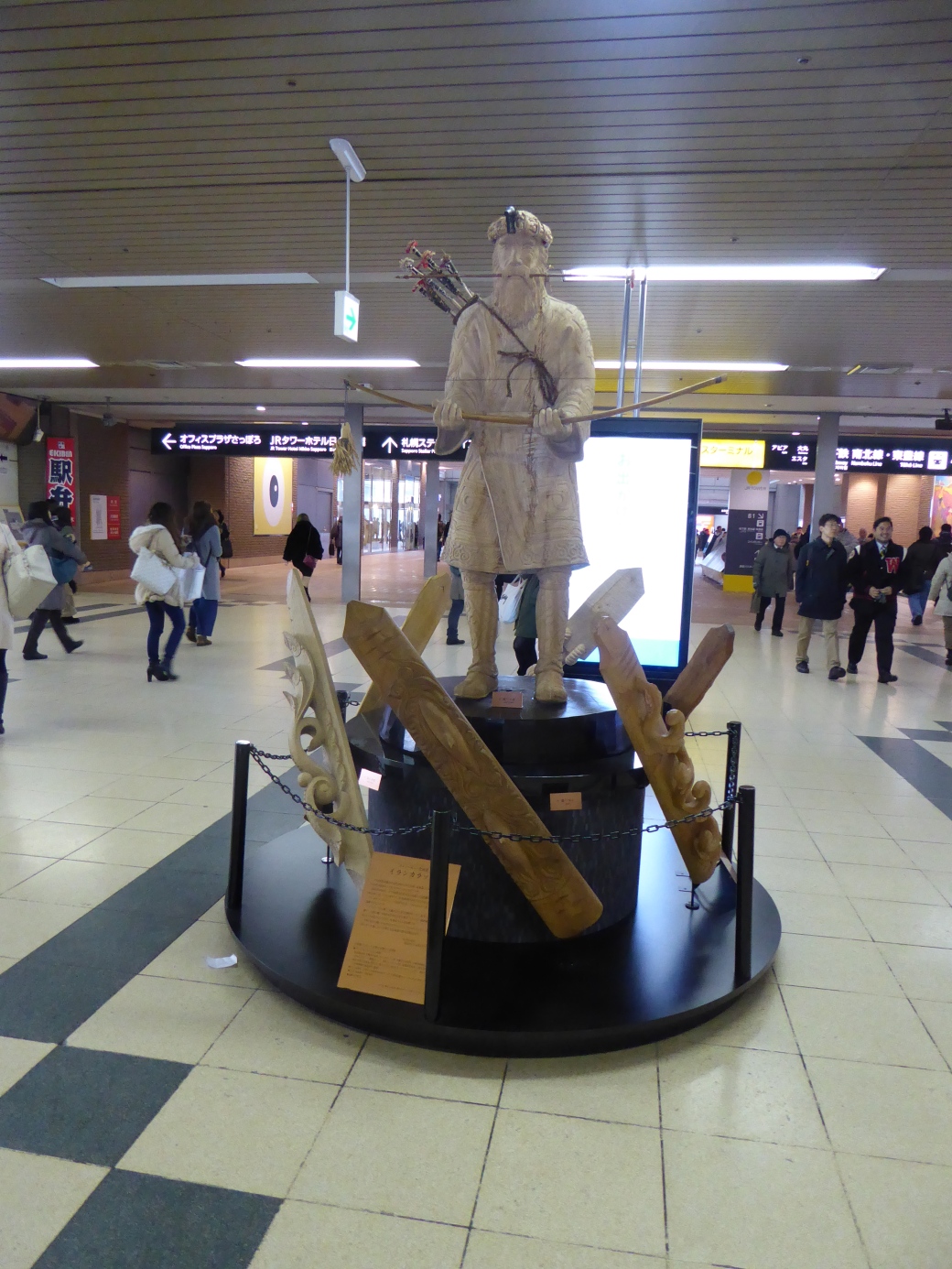 The statue is called “Irankapate” which roughly translates to Hello from the language of the Ainu people. The Ainu are a Japanese minority people who where the original people native to Hokkaido although they were only recognised as such as recently as 2008 and the statue commemorates that.

After purchasing those tickets we set off to find our hostel. As I mentioned there was a lot of snow, had this have been in the UK the country would have come to a standstill, however efficient Japanese were still going about their daily business and while I with my walking boots was worried about slipping on pretty much every step I took others were running around in high heels and smart shoes with no worries.

Some of the pavements were clear as had been explained to us by some of our friends who live in Japan they use the thermal water under the pavements to heat the pavements and melt the snow. We did also see a number of people at work clearing paths. Other areas had just been trodden down and were very slippery, as we progressed towards our hostel some pavements even that wasn’t the case and we found ourselves wading through snow. The roads hadn’t been cleared at all, most cars were four by fours that had obviously been designed for such weather, but the taxis would skid to start and stop at every set of lights, they seemed to be sort of under control with it though.

The next day we had some time to explore before our train so after a bit of a late start we took our bags up to the train station and went for an explore. What we found wasn’t quite what I expected. The first slightly unusual thing we found was this clock tower. 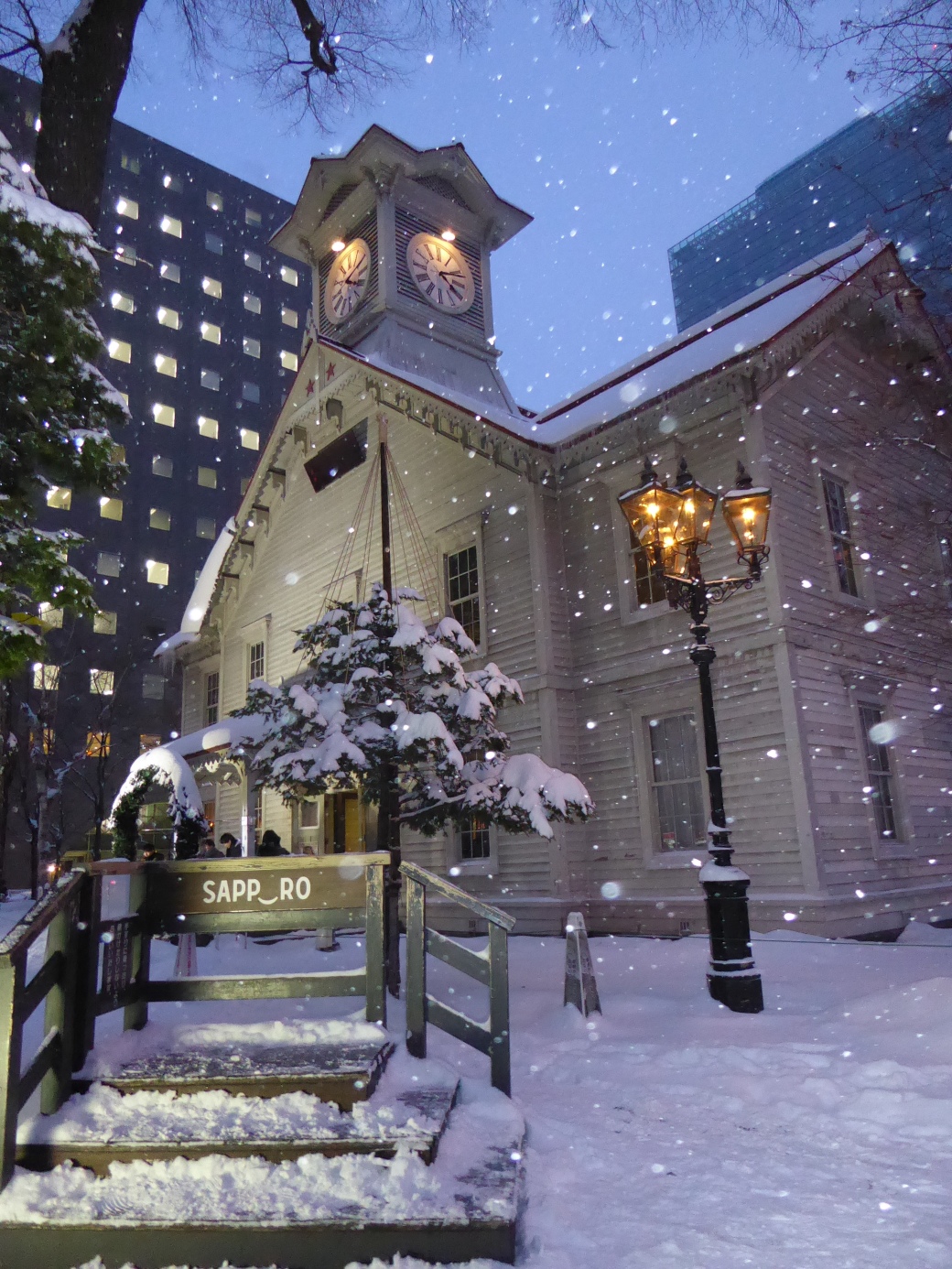 It just looked quite out of place, it struck me as quite a colonial style, especially with the lamp post just outside, but it was beautiful none the less.

We continued on with our exploring and what else should we find but a Christmas market. Now I know that isn’t that unusual as they have them all over the world, it was just a bit odd to see as it was like a bit of Germany in Japan. 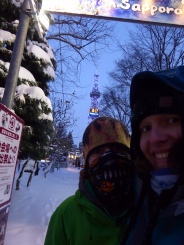 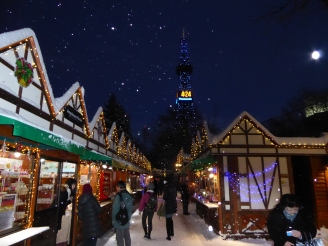 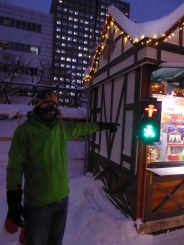 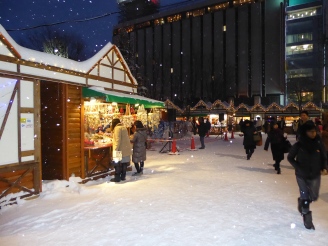 If you have ever been to Berlin you might recognise the lights my husband was pointing to as Ampelmann, this was the little cartoon man that was used in East Germany before the fall of the Iron Curtain at pedestrian crossings. Perhaps slightly ironically now Ampelmann is used to bring in lots of revenue with various Ampelmann inspired merchandise. I actually own a pair of Ampelmann earrings, but this is the first shop for it that I have seen outside of Germany. Despite the appearance and a couple of shops, most of the stalls actually seemed to be Russian, selling all kinds of things from classic Russian dolls to apparently hand made Russian candles.

Just before wandering up to catch our train we stumbled across a rather beautiful light display and I had to take some photos even as the weather began to really close in. 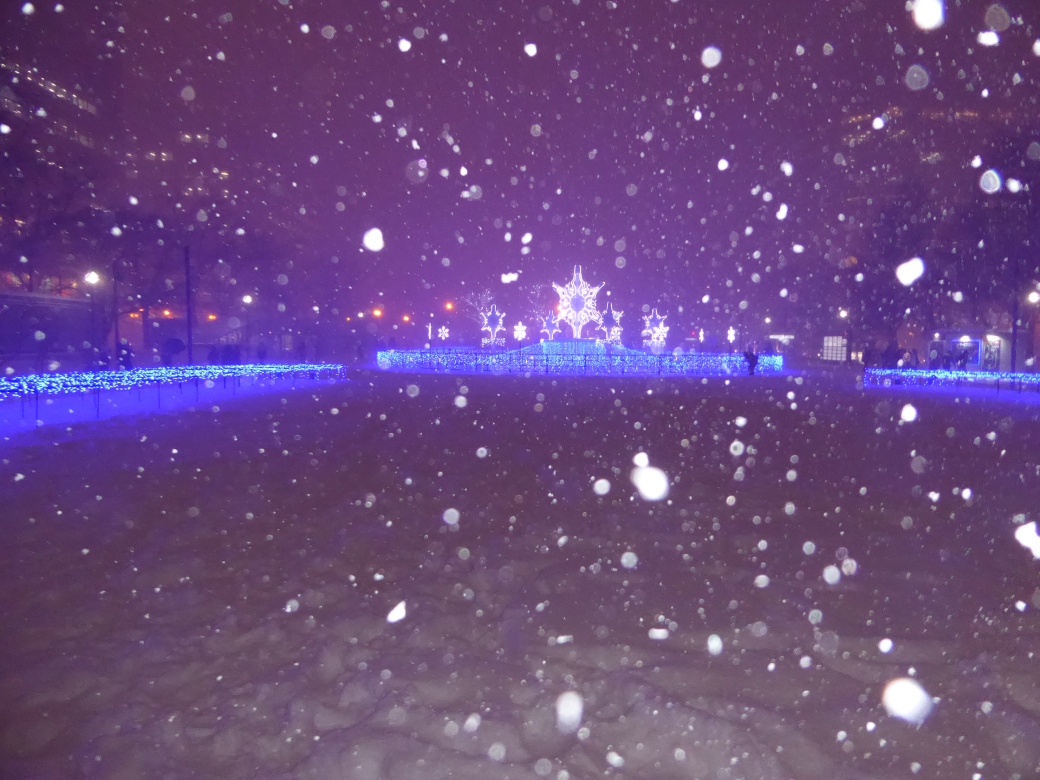 On our return to Sapporo, before heading back to Tokyo there was one thing on my husband’s mind and that was beer. I am not a beer drinker myself, but I did study and work as a chemical engineer before this trip, so I was quite happy with the prospect of a visit to the Sapporo Beer Museum. 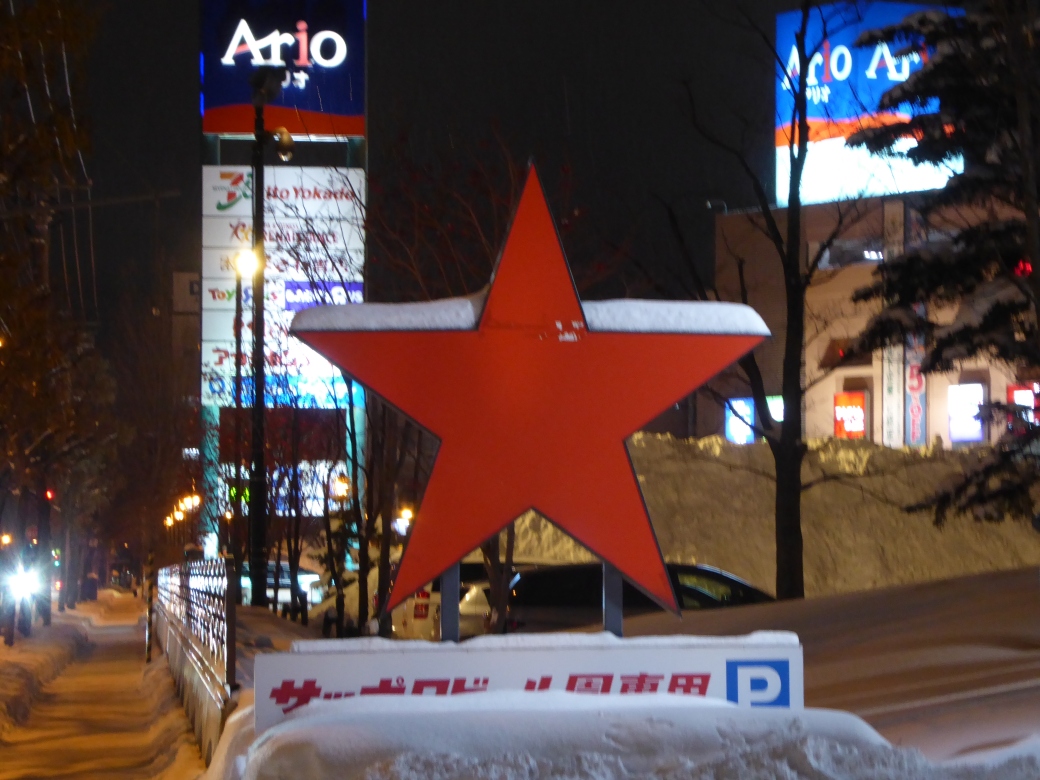 As we arrived I was surprised at the aesthetics of the place. I must admit I hadn’t done much research as this really was more for my husband, but I hadn’t expected such a beautiful building. It almost looked like a church, although having been to Vietnam earlier in the year the red star which in this case is the symbol of Sapporo beer put me in mind of a communist church, very odd. 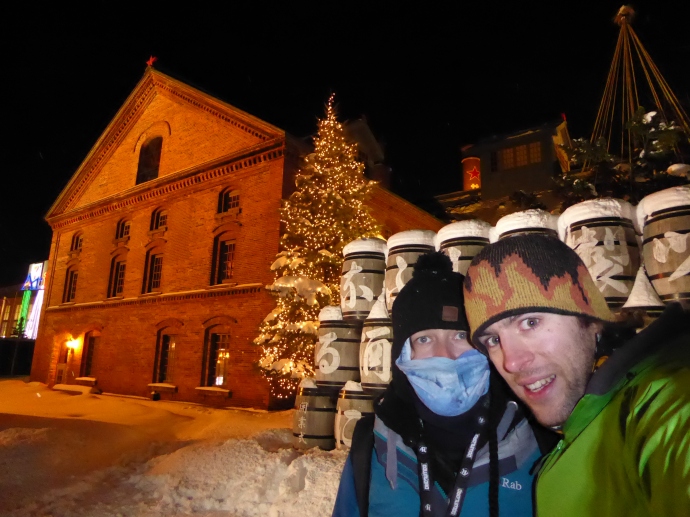 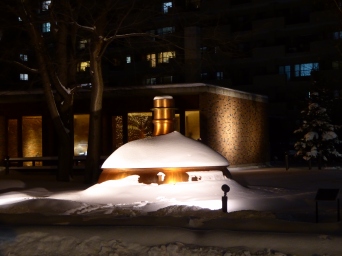 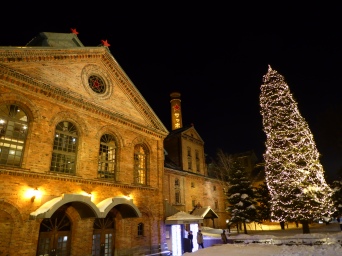 The museum itself was fairly interesting. It didn’t go into the process quite as much as whiskey distillery tours I have been on before, but then it was free. There were a couple of big pieces of disused industrial equipment, but most of the museum was about the history of the beer, there was also not a huge amount of information in English. 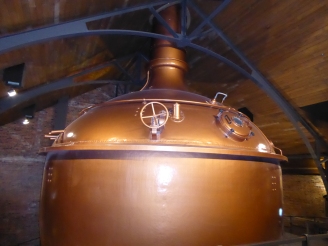 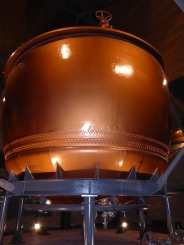 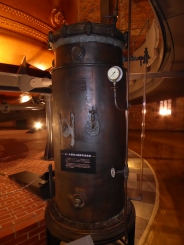 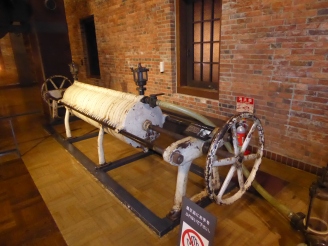 Seeing how the building and advertising had changed over the years was quite interesting, particularly seeing the way they used to advertise beer in Japan, having been used to western adverts. 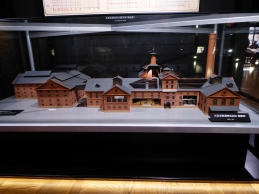 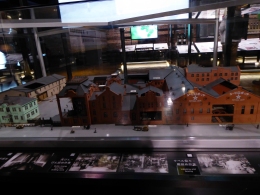 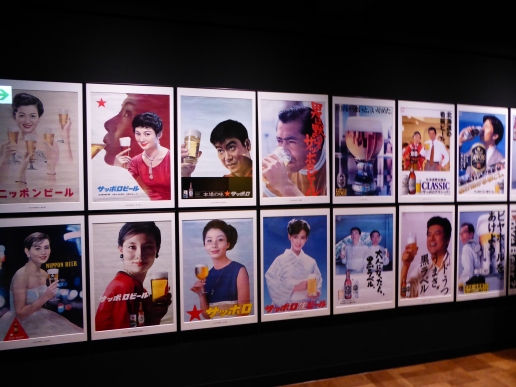 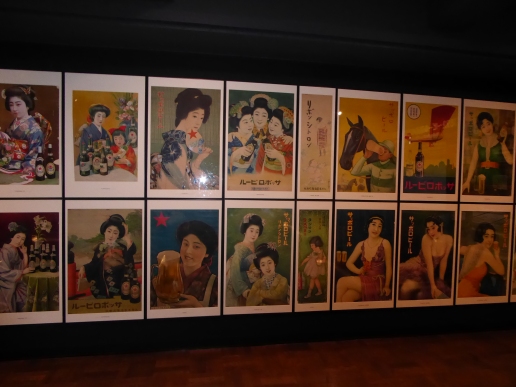 After the museum, there was a rather beautiful tasting hall where you chose and payed for your beer (or soft drink) and rather randomly cheese at a vending machine and then took the tokens provided up to the bar to exchange for your beverages. My husband got a deal where he could try the three main beers and I got a soft drink, we also got two pieces of cheese, but some how ended up with a third piece for free. I enjoyed the cheese and I think it is safe to say that my husband enjoyed the beer. 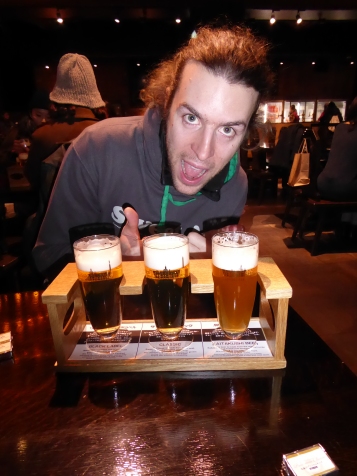 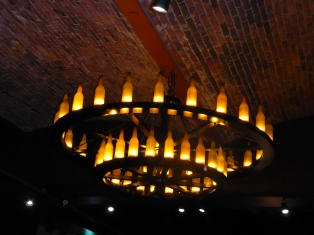 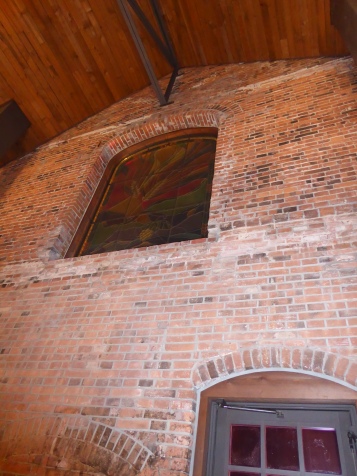 As we were leaving my husband briefly became stuck in a glass of beer and started drowning in it. 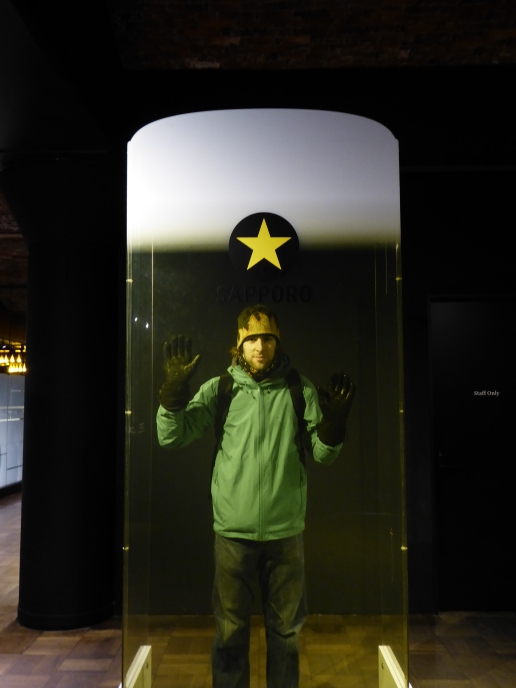 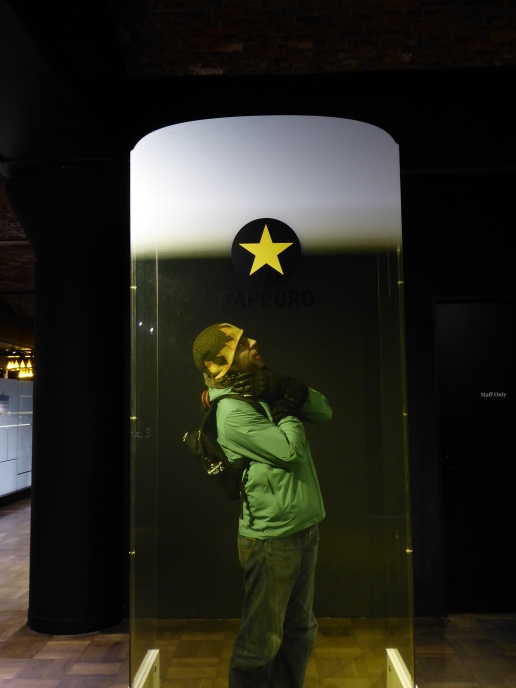 After rescuing him from the beer, we headed back to our hostel. We had a fairly short time to enjoy this slightly unusual Japanese city, but we really did enjoy our time in Sapporo.

One thought on “Beer, Christmas Markets And Snow… In Japan”